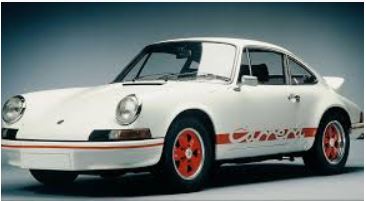 Club Sport
1988 was the first lightweight 911 special since the original Carrera RS some 15 years earlier.
On its arrival the original 911, or 901 as Porsche had first intended calling it until the French manufacturer Peugeot pointed out that they owned the trademark to model designations with an '0' in the middle, was a huge leap forward from the company's original four-cylinder 356. With its 2.0-litre flat-six, five-speed gearbox, independent suspension and disc brakes the new 2+2 sports car was quickly snapped up when it first appeared
at the 1963 Frankfurt Motor Show.
A seemingly continuous development program saw the 911 evolve at a pace. The Targa model was launched in 1965 in anticipation of US legislation that would ban fully convertible cars (it never happened, but the Targa
proved a popular choice with its distinctive brushed stainless steel rollover hoop and zip-out plastic rear window). More power (160hp) and larger wheels (5.5-inches) arrived 12 months later, as did ventilated discs
and a four-speed Sportmatic gearbox. The Targa's plastic rear window was replaced with a more conventional glass item in 1968.
The start of the next decade saw the flat-six's capacity grow to 2.2-litres and gave us the sublime 2.2 S and a chunky 180hp (190hp in 1973). Measures were also taken to prolong the life of the 911 with PVC and galvanized floors both introduced, and the legendary Fuchs wheels became available across the range.
1973 was the year every 911 aficionado has indelibly inked on their mind: the 2.7 Carrera RS arrived. 975 kilos, 210 Bhp, aluminum bodywork, lightweight glass and the infamous duck-tail spoiler signified the most focused,
driver-orientated production 911 to date. Rarer R and S/T racing models had come and gone, but this was the first performance-orientated 911 road car to be sold through the dealer network. A legend was born.